A new online tool from the University of Iowa can help Iowa farmers more efficiently plan their annual pesticide applications. 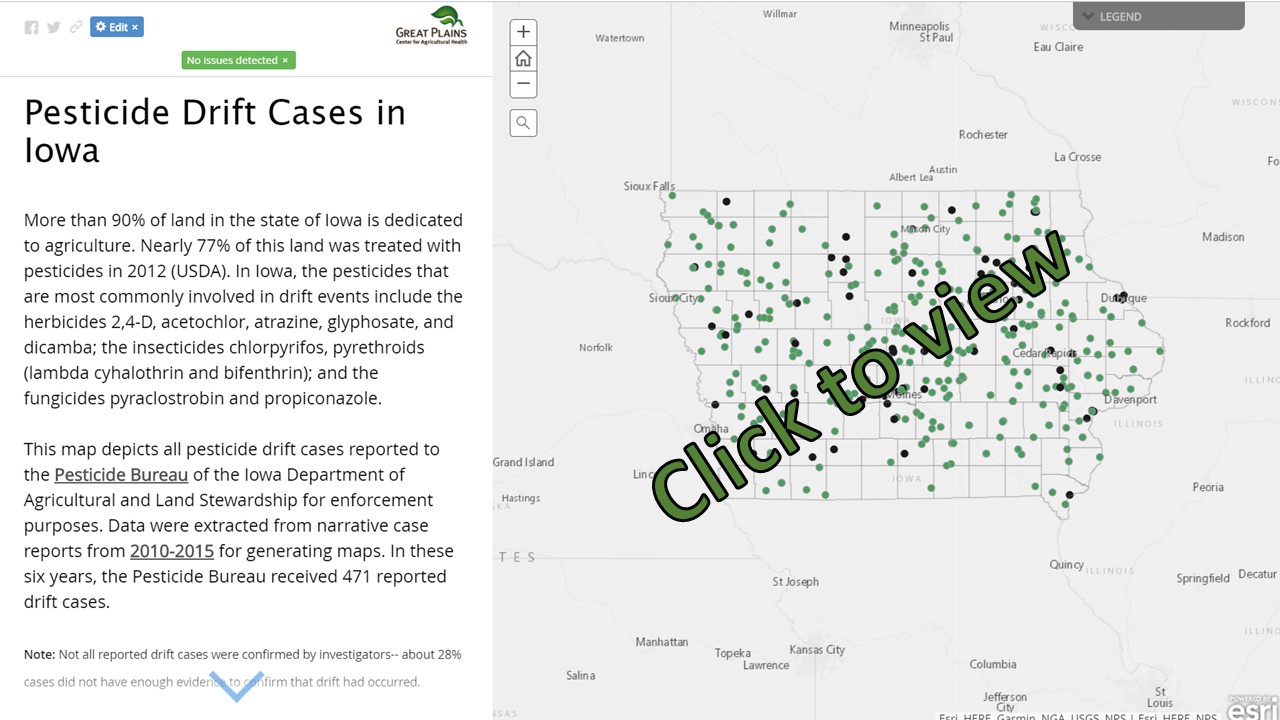 The tool, an interactive map, tracked and analyzed 450 cases of drift that were reported to the Iowa Department of Agriculture and Land Stewardship and Pesticide Bureau from 2010 to 2015. It was compiled by the Great Plains Center for Agricultural Health (GPCAH) in the College of Public Health.

“These story maps provide information directly to farming and rural communities,” says Jenna Gibbs, GPCAH coordinator. “Our hope is to see fewer drift cases over time by sharing what was learned from cases in the past.”

Among the findings from analyzing five years of reports:

–fewer than one-third of the drift incidents involved aerial applications by crop dusters; most drift cases were from ground sprayers.

–the study confirmed manufacturers’ recommendations that pesticides be applied when windspeeds are less than 10 mph.

Jenna Gibbs says drift costs farmers money because it reduces the amount of pesticide that lands on their own crops. It also has the potential to damage neighboring crops and property, and questions have been raised about health impacts to people and livestock.

The map, she says, was a response to those concerns. Individual users can look at their own county and click on individual cases to learn more about weather and application factors influencing drift cases.

“The goal was to identify and communicate important risk factors associated with pesticide drift events to both pesticide applicators and the general public,” says Gibbs. “It also provides useful best practices for applicators to help them plan their pesticide application. For example, the maps explain how both wind and relative humidity factor into drift cases, how drifts changed across agricultural seasons, and what types of damage occurred from drifting pesticides in Iowa.”

The online maps were compiled by Jessica Ricchio and Amy Kopale, graduate students in public health and geography, who gathered data from the state narrative reports that sometimes exceeded 40 pages. Gibbs says the maps provide both a local and statewide picture of the impact of drift, with cases reported in nearly every county in Iowa.