Farmers operating equipment on roads should be cautious of alcohol-impaired drivers, especially during nighttime work.

Link to article: Prevalence of alcohol impairment and odds of a driver injury or fatality in on-road farm equipment crashes.

Rural roads can be hazardous for drivers due to poor roadway conditions, high travel speeds, and frequent encounters with farm equipment and other slow moving vehicles. A recent five-year study published in the December edition of Traffic Injury Prevention identified more than 60 alcohol-related crashes involving farm equipment in four Midwestern states. “We found that the passenger vehicle drivers were more often impaired than the farmers operating their equipment.  This is important because these impaired drivers may be slower to recognize and react to farm equipment, and more likely to misjudge the differences in speed of the equipment on the roadway,” said Karisa Harland, the lead investigator.

The team of researchers from the University of Iowa and University of Minnesota found that the percentage of alcohol-impaired crashes involving farm equipment varied by state. North Dakota and South Dakota, respectively, had the highest proportions of alcohol-impaired driver crashes when compared to the other states. Most crashes resulted from the impaired passenger vehicle driver rear-ending or running head-on into the farm equipment.

Not surprisingly, a greater percentage of the alcohol-impaired crashes occurred at night and on weekends. “We know that during critical times of the year, farmers have to work around the clock. Overall, the proportion of alcohol impairment in crashes involving farm equipment is low—less than three percent,” said Harland.  “However, when these crashes occur they can be devastating, because most of them result in an injury or death. There is a continued need for educating all road users about alcohol use while driving and the appropriate ways to interact with farm equipment on roads.” 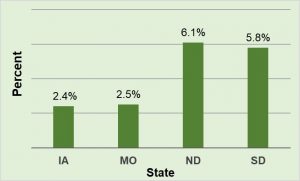 The percentage of alcohol-impaired driver crashes were different for each state. North Dakota and South Dakota had the highest percentages of these types of crashes.