Intervention to Reduce Exposures in CAFOs

Worker exposures in concentrated animal feeding operations (CAFOs) are at risk of adverse respiratory outcomes. This project involves adapting ventilation techniques for use in CAFO, particularly swine farrowing barns during Midwestern winters, to reduce hazardous exposures. This work involves performing an intervention at a farrowing room at the Mansfield Swine Education Center at Kirkwood Community College (Cedar Rapids, Iowa). This work investigates the feasibility of installing ventilation systems with air pollution control equipment to treat and recirculate air in the wintertime to improve air quality and minimize operating costs to farmers. Over the course of this project, the study team will:

The project’s long-term objective is to provide design and operation guidance of ventilation systems for swine producers and builders of CAFO structures. By adapting technology optimized in this study, workers will have reduced exposures to airborne contaminants, thereby reducing the risk of developing occupational lung disease. This study focuses on only one season (winter), when ventilation is minimum to reduce heating costs, and one phase of the operation (farrowing), where workers spend proportionately longer periods in CAFO facilities than other operations, thereby having larger exposures than in other barn activities.

The methods used in this study should be adaptable to other operations in future studies. However, to provide swine producers with a rationale to adopt this intervention, we must demonstrate that this control measure (1) is effective at reducing contaminant concentration, (2) does not adversely affecting production, and (3) requires minimal maintenance at a reasonable cost. This study will focus on these endpoints in order to influence future adaption of the optimized solutions resulting from this study.

Model Development and Use

Data from this work were used to develop and validate a mass- and energy-balance model to estimate the contaminant concentrations and energy costs associated ventilating a farrowing barn during the winter. Park et al. (2013) present this model, along with comparison to the field data of Reeve et al. (2013) While estimates of ammonia and carbon monoxide concentration were lower in the model compared to field measurements, estimates of dust and carbon dioxide were reasonably represented in the model. Factors such as wall insulation and the exchange rate between the manure pit air and the occupied room air above had little effect on cost estimates relative to recirculation of treated room ventilation air.

Following the development of the model, we used it to identify and rank relative performance of ventilation system designs (flow rates from 500 to 2000 cfm, five air pollution control devices to clean the ventilated air, and five recirculation fractions of treated air). Simulations, reported in Anthony et al. (2014) have identified that in-room ventilated propane heaters may be a significant carbon dioxide source, regardless of ventilation system selected. Furthermore, for the farrowing room we simulated, ventilation systems operating at 2000 cfm and recirculating 75 to 100% of air treated by traditional dust control technologies (cyclone, electrostatic precipitator, or filtration system) can reduce dust concentrations below recommended levels at costs of $0.22 to 0.54 per piglet produced, over a 90-day winter period. 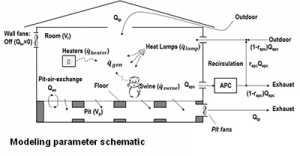 CONTACT US if you want additional information on the Matlab-Simulink model developed for this project.

A filtration unit (shaker dust control system) has been evaluated in the laboratory to examine the suitability of deploying an off-the-shelf air pollution control device into an agricultural setting. Studies examined filter performance, the lifetime of the filter based on anticipated concentrations when deployed in the barn, and operational parameters necessary to make the unit easy for producers to operate. The unit with standard polyester bag filters was tested at a flow rate of 1000 cfm using Arizona Road Dust (<1 to 200 um). The collection efficiency was assessed by particle size and ranged from 75% for small particles (<4 um) to 99% for larger particles, by count. From these results, we anticipate the filters should be sufficient to treat air over the 3-month trial period. A manuscript has been accepted . 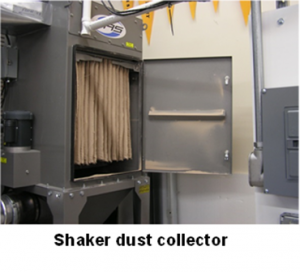 During winter 2013-14 (Year 1), the ventilation system, including the shaker dust controller (SDC), was deployed at the test site.  During winter 2014-2015 (Year 2), the SDC was replaced with a cyclone to reduce dust concentrations in the room.  Also during Year 2, the heaters were replaced to attempt to reduce carbon dioxide concentrations in the room.

Year 1:   Initial monitoring data indicate that temperature inside the barn was not adversely affected by the ventilation system and that dust concentrations in the room was reduced by 41% for small (respirable) dusts and 33% for larger (inhalable) dusts.   High carbon dioxide concentrations were measured in this room, confirming what we identified in the simulations.  In preparation for Year 2 work, we identified and installed a gas-fired heater that is engineered to exhaust the combustion gases to the outside.

Year 2:  Year 2 monitoring (Dec. 2 – Feb. 19) focused on identifying whether an industrial cyclone was as good as the SDC was at removing dusts from the farrowing room.  The cyclone reduced dust concentrations for larger (inhalable) particles by 30%, essentially the same as the SDC.  However, this unit reduced respirable dust concentrations by only 19%, substantially less than what the SDC removed.

Heater Intervention:  To assess carbon dioxide, monitors were deployed at the same six locations during both winters.  Year 1 used a standard 60,000 BTU gas fired heaters to warm the farrowing room, but these were replaced with vented heaters (same BTU) in Year 2.  We identified a significant and substantial reduction in carbon dioxide by the simple substitution of the heater: the old heaters produced an average 2480 ppm carbon dioxide concentration, but the new heaters averaged only 1401 ppm, below the recommended 1540 ppm limit.  Because the outdoor temperatures and production factors varied between years, we estimated concentrations for the year in which the heater was not deployed (based on sow and piglet counts and outdoor temperatures).  From this, we were able to attribute 200 ppm of the carbon dioxide reduction between years to production factors and 800 ppm reductions to the replacement of the heater alone.

In Year 3, we compared contaminants generated by both vented and un-vented heaters t between farrowing rooms. Room concentrations of CO2 was attributed to outdoor temperature (T=oC) and number of sows (S) and heater:

Where H = 1 if traditional (un-vented) heater or 0 for the vented heater.

This equation indicates that the un-vented heater contributes an estimated 988 ppm to the room CO2.  While this reduction is significant and substantial, it may not reduce all farrowing operations to the target of 1540 ppm, particularly if the concentrations exceed 2500 ppm from animal respiration, which could occur with larger capacity farrowing rooms. To further reduce CO2, additional fresh (outdoor) air would be required to dilute CO2 in the room.  However, as this project identified, heating of this outdoor air in the winter would be required to ensure animal health.  If CO2 was controlled only with increased fresh air while using the traditional un-vented heaters, CO2 would be expected to increase instead of decrease, due to heater exhaust in the room. Any attempts to reduce room contaminant concentrations with fresh air should be accomplished only with the reliance on vented heaters to prevent excessive CO2 in the room.

with S = number of sows and the fitted factor f=1 for the vented heater and 6.68 for the traditional un-vented heater.  The heater was not identified as a significant contributor to respirable dust.

Our team continues to communicate with the barn manager to track heater performance over time as we assemble guidance for producers wishing to replace old heaters with these units for a simple way to improve CAFO air quality. 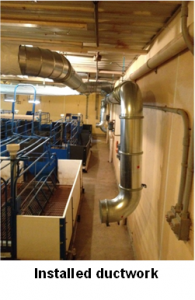 In the News:  Link to media stories on this research:
Summary and discussion of the modeling studies:

The following materials have been prepared and delivered to workers in the study barn and are available to swine producers and Agricultural safety and health professionals for use as outreach materials. 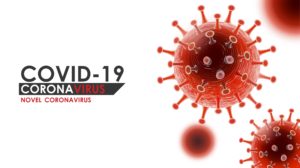