Surveillance of Agricultural Injuries and Fatalities

Surveillance is a critical component of effective prevention and intervention. Agricultural injuries and illnesses are higher than many other industries, and information about these events can help in the development, implementation, and translation of prevention programs and policies.

Our aims are to:

Agriculture plays a vital role in society by providing critical market goods such as food products and raw materials for manufacturing. The farm lifestyle has been a mainstay of American culture. However, the agriculture industry has one of the highest fatality rates in the United States and poses particular risks to vulnerable populations such as elderly workers.

In 2010, the Bureau of Labor Statistics reported that the agricultural industry ranked third in the rate of recordable injuries, trailing only to the health care industry and the transportation and warehousing industry. In addition, NIOSH reported that about 243 US agricultural workers experience a lost time injury every day. These reports likely underestimate the magnitude of the injury problem on farms however, because many farm injuries may not meet the inclusion criteria for OSHA reporting. For example, businesses with 10 or fewer employees are not required to keep OSHA illness or injury records.

Farming as an occupation involves many exposures and hazards which place farm workers at high risk of injury. These include working with machinery, animals, and hazardous environments (Karttunen and Rautiainen, 2013; Jawa et al., 2013; Sprince et al., 2007; Swanton et al., 2016). One unique aspect of the farming industry is that farm family members are also exposed to these hazards, even when they are not involved in farm operations (Fisher et al., 2009; Goldcamp et al., 2006; Gross et al., 2015). 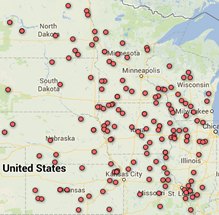 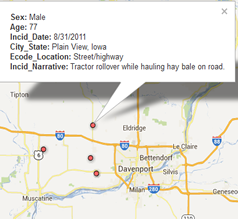 The GPCAH Surveillance Core aims to provide our partners with information about the frequency and characteristics of fatal and non-fatal agricultural injuries.  In addition, we have created visual data (infographics) to translate the study findings into clear and practical information.